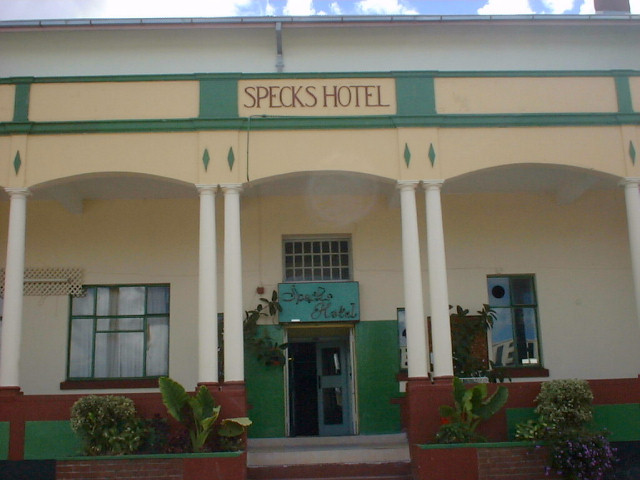 Specks Hotel - featured in this write-up

In 1906 an enterprising trader named Godwin opened a small canteen and started a forwarding agency along the railway to serve the needs of the prospectors and small workers who were seeking their fortunes in the district, which was showing considerable signs of promise. This was the beginning of Gatooma. The place was referred to as the 'Klondike' of Rhodesia, and the canteen flourished as miners descended upon what was the only form of recognised entertainment during the weekends.

The name, Gatooma, is said to be derived from a hill near Golden Valley, called Kaduma, which is a Sindebele phrase meaning 'which does not thunder or make a noise'. The name is possibly derived from a Chizezuru word, 'Kudoma' meaning a word which must not be spoken because it refers to a holy place, inhabited by spirits. It was likely that the hill concerned was venerated as some early shrine, but now it was silent, for no tribal spirits spoke from its depths.

Two years after Godwin opened his small canteen, Speck's Hotel, which simply consisted of three huts, a dining room and a stable was opened, the latter providing accommodation for the travellers' horses, as motor cars were still something of the future.

The development of the Hotel corresponded with that of the new township, and was soon enlarged to a building of wood and iron. As the years passed, it again expanded to meet the local requirements, and the present lounge in the older portion of the hotel was constructed in time for the first armistice ball, and became the social centre of the town, where various public meetings have been held from time to time. Mr. and Mrs. P. Levi took over the establishment in 1923, and introduced many improvements, including the provision of hot and cold running water, electric lights and call bells.

The second hotel to be built in Gatooma was the Grand, which was erected in 1925. The Goldberg brothers who owned it were determined that it would be of modern design, and the dining hall made provision for 400 guests. This hall had the distinction of having the first sprung floor in Rhodesia, and was often used for dancing.

As the garage is indispensable to the motorist of today, so the blacksmith and wheelwright were indispensable to the pioneers of yester-year. Gatooma is no exception, and J. Devereux set up business there in 1909. Here under the sound of the blacksmith's hammer, or the jingle of the horse's harness, and the odour of polished leather, horses were shod, wagons repaired or new iron bands shrunk over the felloes. Here the miners and farmers met to exchange gossip, or discuss the British Government's foreign policy.

Soon after the establishment of the township, the Standard Bank opened its first branch in 1908 in a wood and iron building rented from Messrs. Fitt Brothers and McDonald.

Four years later, the first newspaper, The Gatooma Mail was produced as a weekly, and has continued ever since.

The original railway station took the form of a railway truck, which was equipped with a telegraph instrument, furniture, including a wood burning stove, and accommodation for the new stationmaster. A wood and iron building followed later.

A sanitary board was responsible for managing the affairs of the new town, which by 1912, was the third largest in Rhodesia. Most of the buildings were constructed of brick, which was readily made from the large numbers of anthills in the area. Gatooma was raised to Municipal status on July 27, 1917, after a petition prepared by C. Holderness, was submitted by the residents to the Government. Before granting the request, however, the British South Africa Company required assurance that Municipal rates on public buildings would be the same as those that applied in Salisbury, and that: hospitals, schools, school hostels and drill halls would not be liable to rates. The Board confirmed its willingness to meet the Government's conditions and the arrangements were made accordingly.

The development of the town continued steadily, if not spectacularly during the inter-war years, and in 1928, the Gatooma hospital was opened by the Governor, Sir John Chancellor. During the Second Word War, an Italian prison of war camp was built a few miles from the town. The town was chosen as the site of the Cotton Ginnery, and other textile plants and these served as the base of the town's prosperity. Many institutions such as the library, Chamber of Commerce Loyal Womens' Guild, came into being at this time. The latest industry to be added is the Cold Storage Commission abattoir, which is being built to cater for the beef production of the district. A Cotton Research Station was established by Major G. S. Cameron of the Empire Cotton Growing Corporation in 1925, with J. E. Peat in charge.

Gatooma originally belonged to the magisterial district of Salisbury. In October 1908, the magisterial district of Hartley was formed which included Gatooma, but in March 1919, the magistrate at Hartley transferred his headquarters to Gatooma, where it has remained ever since, with jurisdiction covering the Hartley Native District. This accounts for the fact that Gatooma car registration numbers appeared under the Hartley district.

As Gatooma was originally built on gold, many of its early settlers were prospectors or miners of the true pioneer stock. They lived in the daily hope of finding their 'eldorado'  but for many alas! it was nothing but a dream, and yet others struck it rich.

One of these was John Mack, who opened the Golden Valley Mine 18 km north of Gatooma. It was Mack who was instrumental in persuading the railways to open the first station at Kaduma. He had to transport all his supplies for the Golden Valley Mine from Umsweswe over non-existent roads. The alternative was to stop the train by burning a fire along the track and when the train stopped, to take delivery of any parcels that were intended for him.

The first electricity for the town was supplied by Messrs. Johnson and Fletcher, a firm of engineers and timber merchants, who installed two clay-covered steam locomotive type boilers to run the generators. The charge was 25c per unit, with a minimum of eight units per month. Most people rationed themselves to the minimum consumption, after which they brought out their candles and paraffin lamps - which after all was what the rest of the country, except for the main centres, had to do.


Most of the information on this page is extracted from the books :
"Avondale to Zimbabwe" written and published by R. Cherer Smith ISBN 0-7974-0313-2 and
"Tabex Encyclopedia Zimbabwe" © Quest Publishing ISBN 0-908306-04-0
with additional notes and photographs by the webmaster and other contributors as acknowledged.